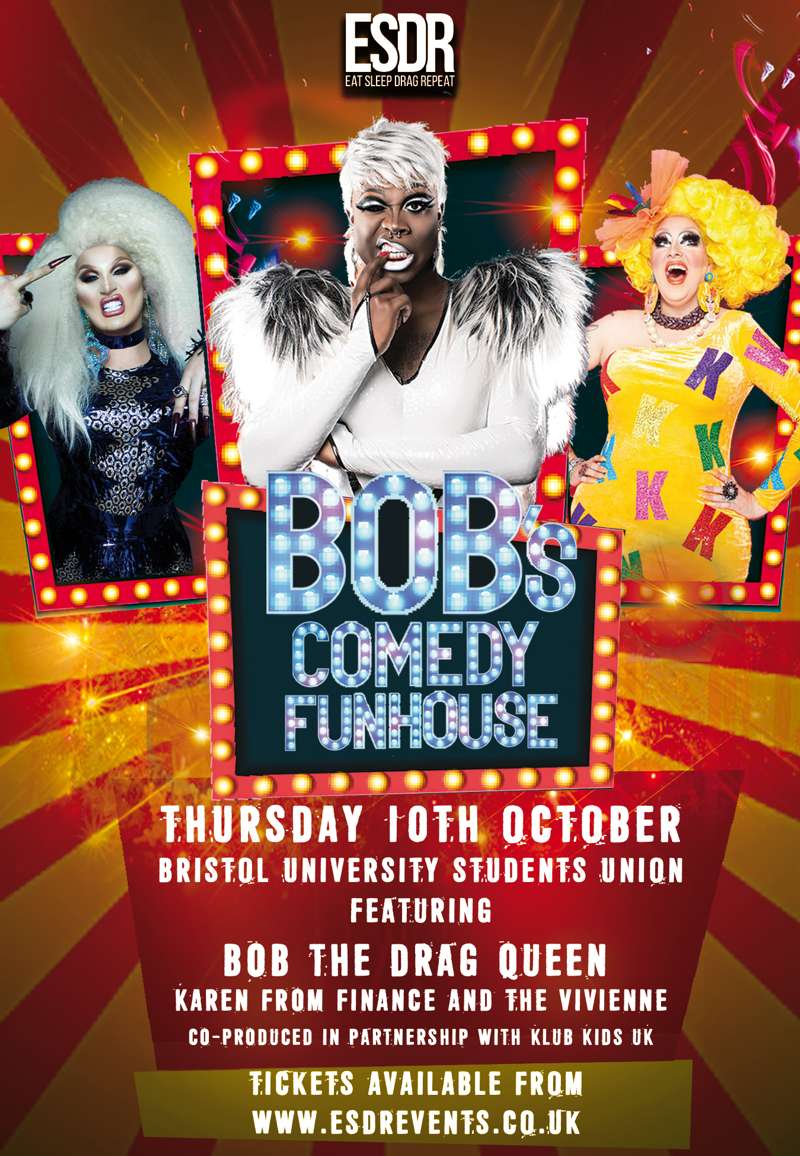 A feature length evening of comedy from the winner of RuPaul’s Drag Race Season 8 and friends!

BOB THE DRAG QUEEN The whole world fell in love with Bob The Drag Queen when he snatched the crown of RuPaul's Drag Race's Season 8. As an artist he's a bold force to be reckoned with, trailblazing throughout the drag world as a comedian and activist known for his honest humour, integrity and ingenuity. He's also a TV star, recently appearing in Netflix’s Tales of the City and soon to host new MTV show “Drag My Dad”, where teens who are struggling to bond with their father work with him to turn him into a queen for the evening.

KAREN FROM FINANCE Karen From Finance is the premiere 'corporate' queen of Melbourne, Australia. She lives alone with her budgie 'Dantè' and enjoys tax time, office-based bonding activities, and invoice archiving. Karen has appeared many times at RuPaul’s Drag Con, performed at Pride celebrations including Sydney Mardi Gras and taken to the stage at International Comedy and Fringe Festival’s around the world.

THE VIVIENNE Liverpool Drag Legend The Vivienne was crowned RuPaul’s UK Drag Ambassador in 2015, winning a trip to Los Angeles and a runway appearance in RuPaul’s Drag Race season 8. She oozes star quality and is known for with live vocals, biting comedy and her world famous 'Cher' impersonation. The Vivienne has performed 1000's of shows all over the world; heavily rumoured to appear on Drag Race UK, we expect to be seeing a lot more of her in 2019.

AGE RESTRICTIONS This is a 14+ Event, Under 16s will need to be accompanied by an adult. ID will be required.

ACCESS INFO Access information for this venue can be obtained directly from the venue website or by contacting the venue by email or via social media.

By signing up you agree to receive news and offers from Eat Sleep Drag Repeat c/o ESDR Events Ltd. You can unsubscribe at any time. For more details see the privacy policy.